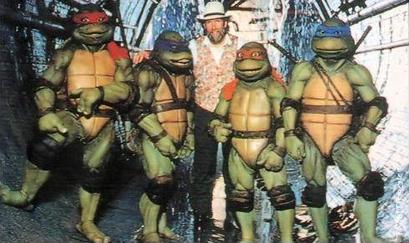 OK, so here I am, I know it's been a while and I haven't posted the blogs like I intended. Life gets on top of you sometimes, but enough about my life lets get on with this film post.

I watched all the original Teenage Mutant Ninja Turtle movies and the cartoon series when I was a kid, (hey I was 10 when this film came out so it was made for my demographic.) It has been a long time since I watched these films but I know I like them, and with the new Michael Bay film that came out and the new sequel on the way, I felt it time to look back at these films and see if they are as good as I remember.

The movie opens with your classic late 80's New York montage and April O'Neil reporting the news about the teenage crime wave happening all over the city. We get a quick glimpse of the foot soldiers while the teenagers pack up the stolen goods into boxes and April makes a Ghostbusters reference by saying “who are you going to call?”

We see April leave in her trade mark yellow jacket.  She is freaked out by a rat. (it's New York, there are rats everywhere!!!)

She catches some kids stealing and is rescued by the turtles, but Raphael loses a Sai. We get the opening credits while the Turtles say cheesy lines they are famous for. The Turtles report to Splinter, a large talking rat.  (Now that is a rodent of unusual size.)  They are so happy to have done well at their first fight but Raphael is very upset to have lost his Sai and Michaelangelo orders a pizza and while Splinter recommends that they meditate the other Turtles dance but Raphael decides to leave in a disguise that makes him look like a flasher lol.

Well so far still the funny and silly film I remember, you can clearly see the handy work of Henson creature workshop, this must have been around the same time as the sitcom Dinosaurs which was a Disney show. At least the Turtles and rat are really on screen and not the CGI muscled bound monsters, like the current group.

As I sit here watching this film Conal is rolling his eyes and I'm smiling at the hilarity of the turtles. Raphael went to the cinema to see Critters (another film that deserves another view.) Casey Jones and Raphael fight and and we get a whole load of sporting references from hockey to baseball to cricket. Raphael is not having a good night, so Splinter talks to him in the classic style of  Master Po from Kung Fu or Yoda.

The police chief talks like a politician and even April says can you tell us what you are going to do in English. We get our first glimpse of Shredder and he is a Darth Vader wannabee, while the turtles are all in love with April. Yet another film from my childhood where there is some weird type of love between animal and human. April gets attacked by foot soldiers and gets knocked out and Raphael rescues her again and he gets his Sai back.

So we already know April hates rats and now she is facing 4 giant talking turtles and a giant talking rat. no wonder she thinks she is having a nightmare this would be a nightmare for anyone but Freddy would need to be there too.

Now time for the history of Splinter and the Turtles. Baby Turtles first words are pizza and radical yes we are in a 90's "dude movies" that were so popular then. The Turtles have pizza with April and show her their impressions of Rocky and James Cagney. Meanwhile Splinter has been attacked and kidnapped.

The teenagers stealing are hanging out doing what ever they want including smoking cigars and there is a very young Sam Rockwell showing a couple of new kids around and offering them cigarettes. This is a kids film huh. (really!) This kids hide out is reminiscent of the island in Pinocchio. I just dropped the remote when I realised it was Sam Rockwell cause I think he is brilliant.

Shredder is making a speech which screams Star Wars with him explaining the lure of the dark side he even tells all the kids he is there Father.  Seriously he wishes he was Darth Vader.

The Turtles state that April is a babe, in my opinion she is very plain and not as babe like as Megan Fox, but she is more believable as a journalist, but they are turtles maybe they are in to plain girls.

The turtles tease Raphael and he storms off like a typical teenager to blow off some steam and is attacked and beaten nearly to death by a large group of foot soldiers, and the 3 remaining turtles take them on in a very comical fight which they are loosing and then Casey Jones arrives to help and April gets the Turtles and herself out of the building by a secret passage and April is fired from her job as her house and fathers antique store burn down. (Not sure if that is irony.)

I still see what made me laugh as a kid but it is not as exciting as I remember, actually this is a very dark film, both lighting wise and the story with Raphael and the foot soldiers.
April takes the Turtles and Casey Jones to an old big house which looks like the house from Texas Chainsaw Massacre. More movie references and even a reference to a great TV show Moonlighting because of the sexual tension between Casey and April.

April writes her diary as they wait for Raphael to recover and narrates it, which reminds me of Sarah Connor in Terminator 2.

Leonardo decides to meditate and hears Splinter, who knew being a ninja gives you the power of the force, with the other 3 Turtles meditating they can all communicate with Splinter who appears as a hologram in the fire.

The final act has arrived as the Turtles are now ready to return and face the foot solders and Shredder. Danny, the kid of April's boss, is hiding in the Turtles sewer and is struggling to be either good or bad so he leaves and heads back to the foot soldier hang out, we get more history from Splinter as he explains his story to Danny, while Casey has followed him. Casey and Danny try to rescue Splinter, while the Turtles fight more foot soldiers in the sewers.

Casey defeats the head of the foot soliders with a golf club, Splinter and Casey try to persuade Sam Rockwell and the rest of the kids that Shredder and the foot soldiers are not their family.

Finally Shredder turns up and we have the final boss battle of the movie, which is reminiscent of the goza scene at the end of ghostbusters. Splinter turns up and Shredder tries to kill him but Shredder falls from the roof into the garbage truck and Casey turns on the crusher and we are to believe that Shredder is dead.

The kids help the cops find all the stolen goods and April gets her job back then she and Casey make out.

Well that is the first film.  It is an origin story and follows the typical 3 acts of a action film, it is a kids film with some good martial arts.  You have to give the guys in the Turtle suits credit for fighting with those massive and probably heavy costumes.

I know it is not every ones cup of tea and that the film has some issues but it is pure entertainment and still just full of funny lines that kids will find hilarious. My memory of the 3 turtles films is that I really enjoy the second one more then the first and third which seems to happen with some trilogies.

I might wait to review the other 2 films as Conal might get really bored and frustrated cause he has already told me how much he hated the second film when it came out.

But watch this space for my next blog.

Posted by SciFiGeekSarah at Sunday, January 10, 2016