Movie and TV Mistress back with the third instalment of WISHMASTER films.

This third film is called WISHMASTER 3: Devil Stone in the UK but is also known as WISHMASTER 3: Beyond The Gates Of Hell. Like the second film it is another straight to DVD release, this film is also rated 15 rather then 18 like the rest of the series, these are signs that it will yet again be bad, but you never know so lets see if this can redeem the franchise.


We have some very sedate opening credits showing Persian statues, pottery and a star shaped puzzle box engulfed in flames. Then we have the nightmare of the female lead called Diana, she has a nightmare about the car crash she survived but which killed her parents, while that’s happening she has decided to climb to the roof of her dorm and her boyfriend Greg follows her. Greg thinks she has jumped off the roof and we get a bad attempt at a jump scare when her foot touches his neck.


I predict that Diana will wish that she died in the car crash, meaning everybody will be alive and well at the end of the film.
Diana is a TA in a mythology class, her boyfriend is a student in her class, yeah we all know he wants her for one thing the answers. So she is doing some extra stuff at the museum with the Teacher, nothing kinky even though Jason Connery so wants to. I find Jason's performance in most of his films to be awful and very creepy, no change there then.


While waiting for Jason to arrive Diana checks out the Persian puzzle box, this is all starting to remind me of Hellraiser, but with a magic eye puzzle; what Diana needs is a fatty-boom-batty blunt! And I guarantee she'll be seeing a sailboat, an ocean, and maybe even some of those big-tittied mermaids doing some of that lesbian shit!
She sees the button to open the box, pulls out the ruby and rubs it, this is a first the ruby does not get broken at the start. Jason arrives wants to take her to dinner, but is denied. Diana leaves and he is left alone and wouldn't you know it the Djinn arrives, the Djinn in this film is now played by John Novak in make up, but will also be played by Jason, oh the joy.
I figure the fact the stone was found in a puzzle box could explain the difference of Djinn in this and the fourth film. It's sad that horror monsters aren’t played by the same actor, Robert Englund stuck with the franchise to the very end, he was right not to come back for the reboot, but his Freddy was and will always be the best.


Jason knows who the Djinn is and says he doesn't want anything but the Djinn blackmails him into wishing, so he wishes for the two most beautiful girls to want him and be there, Djinn obliges and then Jason is sliced to pieces by the girls and the Djinn takes his face so he can walk around. Meanwhile Diana is hanging with her friend who is telling her that her boyfriend will leave her if she doesn't change and then she gets the vision of Jason's death so goes to investigate.


So far I have to say this film is better then the second film and slightly closer to the first so that’s good but the downside is as it is a 15 rated film we only see tits and no real gore.


Diana's friend has sex with boyfriend in public after scaring her boyfriend with a bull head, perhaps that is a set up for later, or maybe I’m expecting too much from this film. Diana knows all about the mythology and what the box and stone are and asks her boyfriend to trust her and tells him everything, but Greg needs to know if she loves him and why she won't get help for her issues and leaves.
Jason is trying to get info about Diana but can't get it so gets the registrar to make a wish, she wishes all the files would go up in flames which ruins his plan to find Diana that way. Diana has a research montage and is late for class. Djinn Jason teaches class telling the class that the Greek gods were Djinn and that the Trojan war was due to the Djinn because Helen of Troy wished to be loved by everybody, what a selfish bitch.
Well wouldn't you know it the College is putting on the play Faust wow isn't that subtle, Jason is tricked in going to a girls room believing he will find Diana but finds Melissa who wants to have sex with Jason, so he leaves and heads to Diana's room where Greg confronts Jason and we get a bad morph job on Jason's face so Greg now believes and runs to find Diana and takes her to church but Jason is there.
We finally get some gross gore and and bad make up effects as a girl becomes thinner, so Diana wishes for her pain to stop and then wishes for the Arc Angel Michael to fight the Djinn, Diana is about to take Michael into her but Greg pushes her out of the way, he and the Djinn fight and Michael barely wins and runs off with Diana. Melissa still wants the professor and wishes for him to break her heart. While Michael and Diana hide in the theatre and he has a go at her for releasing the Djinn.
We get another wish and death, while Diana tries to block the visions from the Djinn, they talk to each other through the visions straight to camera. Diana tries to wield Michael's Flaming sword but gets burnt, so Michael heals her by blowing on her, now that one hell of a blow job. Diana's Friend Katie runs when she sees her boyfriend and then Jason and hides in an animal research lab, phone's Diana and wishes for somewhere to hide and is forced into a cage with rats.
Michael and Jason fight again and Michael cuts off the Djinn's hand but he just grows another, Michael and Diana drive off but Jason jumps on top they continue to fight but then we have a car crash just like the start of the film and she saves Michael before the car explodes. Jason has some dodgy body reforming, which looks like they copied the transformation for Judge Doom into the crazy toon at the end of WHO FRAMED ROGER RABBIT?
Diana jumps off a building saying that if the waker dies before the last wish he looses, but Jason grabs her arm, Michael throws the sword and she stabs Jason and they both fall the Djinn dies. Michael thanks her and resurrects her she and Greg are back together and she tells him she loves him.
This film was way better then the the second, but that’s not hard that was a complicated mess of a film which didn't make sense; this film owes a lot to the teen horror films like SCREAM and I KNOW WHAT YOU DID LAST SUMMER. Jason Connery is well cast as the villain and is very good at sleazy and creepy, the only real problem is that the deaths are nothing like what you have come to expect of the WISHMASTER they are very tame and the effects are very poor.
Though the film was closer to the original in plot, if you came in half way though you would probably think it was a typical teen slasher film, it was very dull and dragged, of course not as much as the second, but that movie felt like the Machine in THE PRINCESS BRIDE, I think it took a year from my life. Thankfully there is only one more movie in this franchise left.
Posted by SciFiGeekSarah at Friday, August 26, 2011 No comments:

Movie and TV Mistress back again with another WISHMASTER film, this time it's WISHMASTER 2: Evil Never Dies (1999)

Movie and TV Mistress back again with another Horror Franchise, this time it's WISHMASTER. 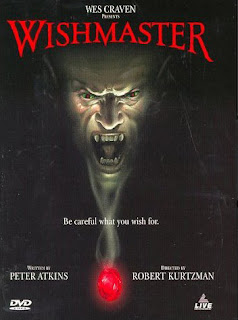