Welcome to another Movie and TV Mistress review of a cult classic. 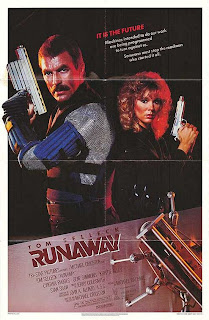 
The cops are staking out his hotel room and Jack goes in when Luther's girl is asking about her purse, this is when you know a guy directed this scene. Because women do not wrap a towel around their waists, I know this was just so he could have the 80's gratuitous tit shot but please stop it we don't do that, like we don't pillow fight in our lacy bra and panties.
I don't know how Gene does it but he makes a floater come down from the ceiling and gas everybody grabs his gun and a hooker and escapes, does he have mind control of all robots because of the chips or something?  Blond cop is shot and we have some vertigo style shots when Jack looks down the stairs of the tall hotel.  The bullet in the blond cops arm is unexploded and needs to be removed and Jack doesn't trust any robot to do it without blowing her arm off, so he does it himself, what follows reminds me of a level on Trauma Centre on the Wii.  He gets it out and she is safe he then invites her to his for dinner and you know she is expecting something more then what he is offering.  Bobby tells his dad off for swearing on TV and they have a giggle.
Marvin cuts open and examines the bullet and discover it is a heat seeking missile and they explain the reason it only goes after certain people is because we all have different heat signatures, OK lets say it does, but if your running, surly your heat pattern would change, wouldn't it.  next Jack has a psychic look at the bullet and she says that Luther and Jack are brothers in a different life and that they will meet very soon.  Luther calls Jack and can see everything he is doing and say he will not be able to trace the call because he is calling from a mobile phone. Oh the days when cops couldn't trace them and you had to carry a car battery to power the mobile phone, yes it was so mobile you couldn't even put in in a bag or hang it on your belt.
Luther wants his girl, Kirstie and they need to move her but first they debug her which means she has to strip. so they drive off in two police cars and Luther has some goons follow them who have a car which they can open the bottom of and drop a remote control car bomb and Jacks partner uses the laser on top of her car to shoot them but there are too many of them, but they survive when they throw out Kirsties purse.  Jack goes to meet Luther in person, Jack has his girl and Luther has his partner so they have to do a trade then Luther stabs Kirstie in the back and fires his crazy gun at Jack so he can escape.
Jack was able to plant a bug in the Templates of the micro chips that Luthor got, but he's to smart for that and its time for another robot kill, yes the scary robot spider crawls up the wall and drops on the cop stabs her and blows up killing 2 cops.  Luthor dressed as a cop and with a glass eyeball checks Jack's profile and finds out about his son.
Yes it's time for the classic third act, bad guy holds loved one hostage and Jack goes after him alone. It's finally time for Jack to face his fear of heights and save his son, Jack and Luther confront each other at the top of construction site and Jack promises to give the rest of the templates to Luther once his son is safely to the ground, once Bobby is on the lift heading down Luther says his spider robots will kill the first person out of the elevator, and it can't be stopped just as it arrives on the ground Jacks partner arrives and saves Bobby. Luther shoots at Jack who ends up in a lift that won't go down, instead it goes right to the top.


The elevator is broke and needs to be reset from underneath but those damn spider robots start attacking Jack and spraying acid at him he climbs out side the open elevator and knocks one spider robot off which explodes the other one stabs his hand and he falls, luckily he grabs the bottom of the lift resets it and now it's going down but he needs to get into the lift before it reaches the bottom.  As he goes down it stops at the floor with Luther and they fight in the elevator, Jack kicks him off before they reach the bottom and the spider robots attack and kill him.
Everybody is safe Jack checks Luther's body who gives us the classic jump scare and then the spiders explode.  Jacks partner invites him to dinner and they kiss which seemed unnecessary but hay it's a boy and girl and there needs to be sexual tension,  he credits roll over them kissing under the sparks of the construction site next to a dead body.  All I’m thinking is your son was kidnapped, you might want to check on him and leave the crime scene just a thought.
I have to give it to Michael Crichton at least when dealing with the future he makes it seem like an extension of current technology and not make it unbelievable, every thing in the film though obviously 80's was actually possible, some robots seemed like 80's versions of ones you might have seen in 50's movies.  Gene Simmons is good as the Bad guy Over the top like all bad guys should be, it makes them more fun.  Tom Selleck is his usual subdued self but it works he is a single father who deals with robots, why wouldn't he quite and shy.  I've seen this movie many times since I was a kid and those spider robots still scare me and the jump scare at the end by Gene still works and I jump every time.
The film feels a bit like a John Badham or Lethal Weapon type story with Sci Fi elements it follows the same arc of the buddy cop movie, however, it being from Michael Crichton I feel like there was something more like this was a novel and a lot of the villains story was removed, like why did he have the chips made and what were they for, this is mentioned in passing but not really explored, apart from that this is a fun film with some funny dated robotics.  I say check it out and if your not scared of the killer spiders, I wonder what does scare you.
Posted by SciFiGeekSarah at Wednesday, March 30, 2011