Welcome back, Today's offering is a film not many will have heard off and one when I was a child I was scared of.  Cellar Dweller is a 1988 horror film about artists that work in the old house that belonged to a comic book creator who died in a fire back in the 1950's.   Well that's the basic starting point, but lets get started.

The film starts suddenly on VHS and opens with Gothic text informing you "30 Years Ago" and we pan down from a full moon to see Jeffery Combs from Re-Animator (1985) inking comic book frames, then we get some shots based off what he is drawing, filmed in the style of Sam Raimi's The Evil Dead (1981) at this point it is not clear what is going on with the editing but it does become clear I promise.

The monster of Jeffery's Comic is the Cellar Dweller and is a large ugly beast with a pentagram in a circle on its chest.

This is where it gets silly, wouldn't you just know it Jeffery Combes has a spell book, that looks a bit like the Necronomicon.  He should know better as he has been in a few HP Lovecraft inspired films and HP Lovecraft did enjoy using the Necronomicon in his stories.  When will people learn nothing good comes from that book.  Though I will admit I do enjoy Ash vs Evil Dead.

So Jeffery reads from the book he even reads the warning, but ignores it.  Right behind him the comic becomes real, he runs off.  Jeffery grabs the axe that appeared after he drew it in the comic and heads back to fight the beast in the cellar, but this is dark magic and it can't be killed by an axe, Jeffery pics up some paper and lights it so he can see the beast.

However, he has lit the pages of the comic therefore killing the beast and as he watches the beast die he drops the burning pages on some cloth and accidentally sets fire to the house trapping himself and dies.

This all happened in under 10 minutes the beast is defeated and Jeffery is dead, so how is there still another hour and 10 minutes of this film?

Well the credits start rolling so you would think maybe someone forgot to rewind the film but no that would be to easy.

While the credits are rolling, I will give you some information on this film's creators, these credits are going on for quite a while and I don't want to fall asleep before the rest of the films starts.  The credits state that it was written by someone called Kit Du Bois, this is a pseudonym for Don Mancini the writer and creator of the Child's Play (Chucky) Films, this is his first film credit and he choose to be credited as Kit Du Bois I tried to find out why but I couldn't.  John Carl Buechler directed this film he directed Troll (1986) and Ghoullies 3 so that could explain the look of the beast.

Finally the credits are over, on with the film. and just in case you forgot the opening was set 30 years ago, they put on screen in Gothic text that it is "30 Years Later"

We are introduced to our heroine Whitney Taylor played by Debrah Farentino who arrives at the Art institute that was set up in the location of Jeffrey's home from the start of the film.  It is a dark stormy night. (Oh the horror stereo type.) Yvonne De Carlo of The Munsters fame startles her, they go to Yvonne's office and Whitney gives a history of her life and her love of the Cellar Dweller Comics. 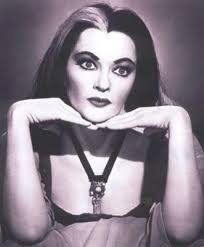 In Classic fashion Whitney is told she is not wanted at the institute but that the board have stated that Yvonne had to find somewhere for her.  She is then shown around the building and told that the Cellar is off limits and Whitney imagines a hideous version of Jeffery killing the girl that was a nameless victim of the beast at the start of film.  Whitney is introduced to all the other artists in the institute that include painters, videographers, performance artists and a writer.

We see another of Whitney's nightmares and then one of the artists is outside screaming to the moon just to release her tension.  We get some more back story about Whitney and her enemy Amanda who is at the institute.  Whitney goes exploring the cellar though she was told it as off limits and we get an obvious jump scare because Phillip who is a finger painter startles her in the cellar.  Whitney finds the Necronomicon and reads the passage from the start of the film so the spell is activated.  Whitney then requests to be allowed to work and sleep in the cellar.

Amanda and Yvonne conspire to get rid off Whitney, but Amanda becomes the first new victim of the Beast that Whitney has created from the original art, she draws a comic strip where Amanda is attacked and eaten by the beast.  What has been drawn happens, but no one hears Amanda's screams for help.

We are 43 minutes into the film with another 31 minutes left and though the Beast in the comic asks Who's next.  I just don't care.

One by one the other artists are killed off by the beast either by Whitney's design or by the Beasts choosing, it really doesn't matter the other characters are in the film just to be victims.  Whitney and Phillip discover the beast is real and that Whitney brought the beast to life with her imagination and tries to destroy it by lighting the pages on fire but it doesn't work and Phillip vanishes and Yvonne De Carlo becomes the beast and attacks Whitney.

Whitney trows stuff at the beast and chucks white out which lands on the comic causing the beast to disappear.  Whitney then uses her art to try and bring everyone back and chains up the beast in her drawings.  This all appears to work, Whitney and Phillip burn the comic art to kill the beast but she also destroys the ones she just drew of all the other artists and she is left on her own, or so she thinks and the beast reappears and credits roll as we hear her being eaten by the beast.

I should explain how I know this films, you see when I was 8 or 9 years old, my dad rented this film and let me and my little brother watch it with him.  Now having watched this as an adult I can see no issue with the film it is not scary it is short, it is predicable and has all your classic requirements for a 80's horror film jump scares, gratuitous tit shots and characters with no back story there just to be killed.
But I, as my husband will account, can be easily scared as I have a vivid imagination.

The monster in this film, when I was younger, was the thing of nightmares.  It was my Sully but not funny, I was so afraid as a kid I literally could not go near my bed because I thought this monster was underneath it and I would jump on to my bed from a distance and not let my arms hang off the bed as I was scared it would pull me under, you get the idea.

So why did this movie which is so bad scare me so much, well I think it is like Sadako in Ringu, making something you like and trust, TV and in this case a comic something terrifying, but who knows.  I was sacred of Michael Jackson in the Thriller video so Maybe I was just a scaredy cat.

The whole premise of the film is that imagination can create monsters, therefore as long as you have the monster in your imagination it cannot be killed.  However, this means that by the beast killing Whitney at the end it killed it's self as there was no one left to hold the beast in there imagination.

This is a short harmless film, would I recommend it probably not, it has an interesting cast list but that is all it feels more like a pilot for a series similar to Tales From The Crypt, even the style of the comic in the film is in the same style as the title of that show and comic series. 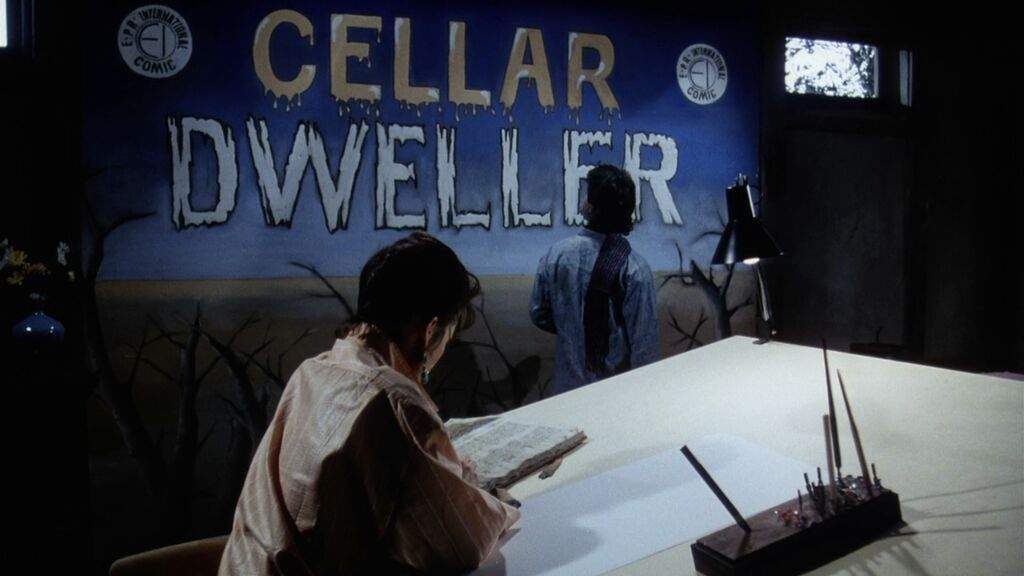 I would say it's worth a watch if you like bad 80's horror or Jeffery Combs.

Well till next time.

Posted by SciFiGeekSarah at Tuesday, May 02, 2017 No comments: