Welcome to another blog from Movie and TV mistress, today's film is called NIGHTMARE WEEKEND from 1986 this film was distributed by Troma Entertainment. 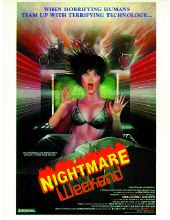 The plot is a scientist has created a way to alter the minds of animals by turning things in to spherical balls which is ingested by the animals. His assistant a Miss Clingstone wants to test this on humans and sell it to another person. The Spherical balls turn people in to what the synopsis calls Mutantoid Zombies.  A subplot of the film is a romance between the scientist’s daughter and a bloke called Ken helping Miss Clingstone.

So, nothing outlandish about the plot and nothing that sounds awful when you consider I have watched many a bad SYFY channel film.

This film is a low budget independent film distributed on Video by Troma entertainment and at least Troma can hold their head up that they did not make this film.

Troma do make low budget B movies but they also distribute many films too.  What surprised me in my research was the movies they have distributed. Some of the films they distribute date back to the 1930s even though Troma only started in the 1970’s but one that really stood out for me that they distributed was the Studio Ghibli film MY NEIGHBOR TOTORO.  I know what you’re thinking but Disney/Pixar distributed that film and yes they did but before they did Troma Films, under their 50th St. Films banner, distributed a dubbed version of this film in the United States theaters in 1993 and then on VHS and laserdisc in the United States in 1994 and on DVD in 2002.  However as happens in the industry the rights to the dubbed film expired in 2004.  As Disney does they bought the rights and created a new dubbed film and released it again in 2006.

But back to NIGHTMARE WEEKEND, this film is badly lit and badly dubbed and the reason for the bad lighting, filming and dubbing will be explained but first I want to discuss the characters of this film.

So the first one is Ken played by Dale Midkiff you may remember him from PET CEMETERY as the father, he was also in the TV series THE MAGNIFICENT SEVEN and FLIGHT OF THE LIVING DEAD or as I like to call it Zombies on a Plane. Anyway, he is quite well known and this is one of his first leading roles.

Ken seems to be a bad guy at the start and as the movie progresses the line becomes blurred, but it is not clear at the end what side he is on.  After the opening of the film he does wear white and gets involved with the scientist’s daughter Jessica.

Miss Clingstone if the villain of the film.  She appears to be played as a wicked stepmother so over the top and wants to be with Ken but also seems to be wanting the scientist and treats Jessica and a maid in the way a classic fairy tale step mother would.

Jessica is the scientist’s daughter. She is incredibly naive for an 18 or 19-year-old, she is so naïve that she does not know what her feelings are and has to ask her computer called George to explain her feeling and what love is.

The other characters are all there just to have sex and be killed or turned into Mutantoid Zombies so nothing really to be said about them they are all pretty one dimensional.

The film starts with a darkly lit scene of 2 blokes trying to break in to the scientist’s home to steal the computer program and then we see a hand puppet, I’m not joking there is a hand puppet working a computer which is alerting him to the possible break in.  I was shocked when I saw this green lipped and green haired hand puppet. And it is a major character in this film his name is George. 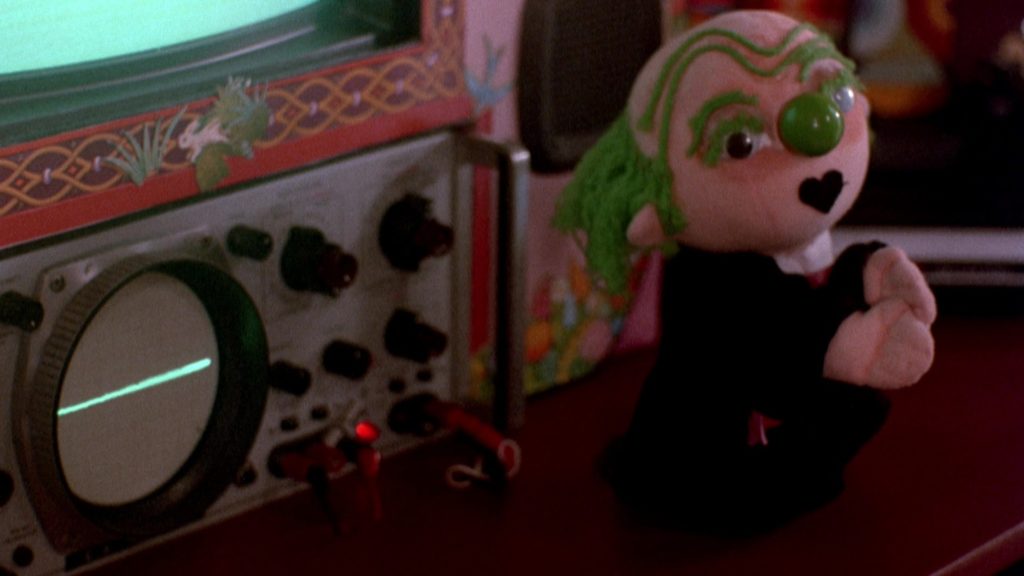 George creates a spherical ball and it shoots towards one of the guys climbing up the building and smashes his face and kills him instantly. We are less than 5 minutes in the film and a hand puppet has killed someone.

We get the titles with a very 80’s song which I have to say is very catchy and is in the opening and closing of my Vlog below.

Jessica tells her friend she is going home and can’t join her for some experiment that her friend will be doing at the weekend.  Jessica’s friend gets a limo with two other girls, they head to the scientists house.   None of them see each other until the very end of the film.  The house isn’t that big.

Nothing happens for the next 55minutes of this film except for sex between the girls in the limo and blokes they met at the Stag pub near the house.  One of the blokes having sex in the Stag is actor Robert Burke he has sex with a girl on the pinball machine while others watch, thankfully the girl seems in to this while Ken and Jessica and others watch them, otherwise it would be like THE ACCUSED where Jodie Foster’s character was raped on a pinball machine.

There is no character development during this entire film, there is nothing likeable about any of the character or sympathetic about any of them, if anything Jessica is ridiculously childlike for her age.
As I have said nothing happens in this film during the first hour of any substance, this movie is an hour and 24 minutes long and at the hour mark while the girls are all having sex with blokes they picked up at the Stag. Miss Clingstone starts having the computer called Apache create multiple spherical balls to change the girl’s personalities.  These balls also kill the blokes before turning the girls including the maid into Mutantoid Zombies that then kill anyone else still alive and attack Jessica who finally sees her friends.

Meanwhile Ken has picked up some money from a buyer for the computer program for Miss Clingstone and is waiting for her at the airfield.  But he is in love with Jessica after a very silly romance story during the film.  He is not going to give her the money.  When Miss Clingstone arrives at the airfield and gets out of her car, the Zombie maid steps out the back of the car and slits her throat, the next part is so hard to see I can’t see what happened to Ken, the only thing I know is George is saying warning must protect Jessica and the film ends on a shot of Jessica screaming.

The film is poorly lit. So much so you cannot see what is happening a lot of the time, the sex scenes are badly lit but you can see the silhouettes of what people are doing during the sex scenes, I’m not sure if this was to get the film a lower rating or not and the gore in the film is very minimal so nothing that could have made this a video nasty. 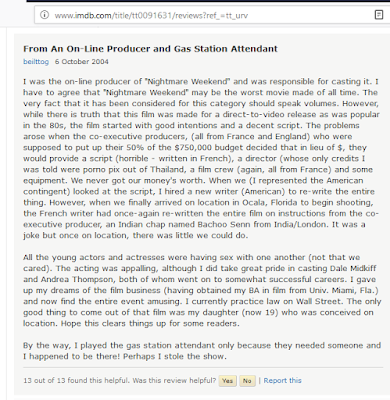 No, it is an awful film, what do you think? … OF COURSE NOT it is so bad, and I feel the title should have been my first clue as it was a nightmare weekend when I watched this and now I have written a review and filmed my first Vlog, So thanks for the inspiration to tell people to avoid this movie.  Do I think it is the worst film ever made?

No, I have seen much worse.  It is just bad, sadly not the so bad it’s good type of film.

Well remember what I always say folks… be careful what you watch.
Posted by SciFiGeekSarah at Saturday, March 17, 2018