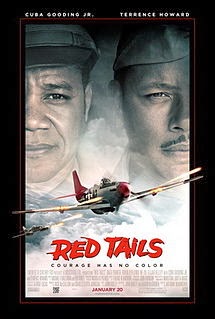 So This is arriving a bit late, as I was very sick recently, but here we go with the final film in my colour themed month, that is referring to the titles of films and not the content of this film.

So the film starts with a very controversial quote made by the US Army War College Study in 1925 which reads “Blacks are mentally inferior, by nature subservient and cowards in the face of danger. They are therefore unfit for combat.” Well that shows how short the American's memories are, how they love to forget and ignore what the blacks did for them in the civil war and how they always fight for them in wars and get ignored so I see this might be trying to be another GLORY based on that quote.

So on with the film, which starts in a major looking WWII air battle, the Nazi pilot looks a bit like Liam Neeson. Boy this movie is appearing very serious as loads of people are dying, I know war is hell but I thought this film was going to be fun. So the blacks are in a red team and appear to be board as they are not taking part in the air fight. They shoot up a German truck and a German train.

So we appear to have an all black air force base and it looks like Cuba Gooding Junior is channelling Denzel Washington. And gives the pilots a pep talk after they read what America really thinks about black pilots in the war, he then tells them to watch the rest of the film and learn something. I do hope this film gets more interesting and fun soon, or I will think that they falsely advertised this film when it came out.

Wow Bryan Cranston playing a racist Coronal, saying that the experiment of having black pilots is over as they have not destroyed any significant targets or taken any out any enemies. However Terrence Howard's Coronal has another white coronal on his side and gets the Red Tails a mission which will get them noticed. So they are all excited and are flying cover for beach landings.

I have a feeling this is going to end badly as they Liam Neeson looking Nazi is fling head on towards them. OK they aren’t doing to bad so far. The captain and the red tails decide to follow the Liam Neeson Nazi back to his base and go against orders, they attack the base But Junior, who prefers to be called Ray Gun, is shot and badly hurt. They head back to their base and feel like heroes.

Terrance Howard is congratulated for what the red tails did but Bryan Cranston's Coronal is still racist. Junior is blind in one eye now and still wants to fly. Terrance Howard is asked to provide cover for the bomber planes as they are not getting to their targets because the white pilots keep going after the Germans and leaving the bombers open to being taken out by the Germans.

Ah time for more racism as Lightning starts a fight in the officers club and then gets arrested, but gets to remain as he is one of the best pilots. They get new planes and Terrance explains their mission. They paint the tails of the new planes red so they stand out. Capitan gets Junior back on the flight roster to fly in the mission even though he is blind in one eye.

OK, just to explain what happened, at this point Netflix crashed and I could not watch the rest of the film, then I got very sick last month so now I’m going to try and continue.

The team are protecting the bombers while the white bomber teams are racist and feel like they haven't got the best protection. Just the typical racism of the time and of movies like this. The Red Tails follow their orders of not going for glory but protecting the bomber so the Nazi's decided to attack the Red Tails. Junior gets hit and has to bail out and is captured by the Nazi's.

After the bombing attack Lightning argues with the Captain and about the decision to let Junior fly, The captain tries to get Deacon back to base even though he is badly hurt and bleeding from the head and the plane is leaking oil in the cockpit. Lightning brakes from the squad after the mission is over to fly down the coast and tries to take on a U boat (I think) and ignores smoky who tells him that’s enough and lets go home, he actually succeeds in causing major damage to the U boat.

Meanwhile, Deacon is trying to land with the help of the captain as he can't get the canopy open and can't bail. He ends up crashing the plane which ignites in to a fire ball they get Deacon out before the plane explodes. Lightning and Captain argue again as Lightning accuse him of drinking.

Junior is taken to Stalag 18 and is put in a bunk with other prisoners who requested him and he is assured that he will not be hanged and not be treated any different from the other men as they are in the middle of a delicate operation. Wow I wonder what that could be maybe the Great escape.

Lightning shows of his flight footage and his attack of the U Boat and then spends time with his Italian Girlfriend. Lightning talks to captain and asks him to stop drinking and he will fly right and follow orders.

The team go to town together and a white pilot starts shouting at them down the street and they think he wants to start a fight but the guy wants to thank them as he is from one of the bomber teams, they are told the drinks are on him and every one in the club thanks them one by one. Lightning proposes and the girl asks him for time to think.

Junior helps the guys in the camp escape and travels on his own so he doesn't draw attention to the other men.

There is 30 minutes left and I have never felt like there was any risk or danger for the lives of any member of the Red Tails.

The top brass refuse to let the Red Tails fly the whole way with the Bombers on a big mission as it will be reported and they can't have a colour flight squad protecting them. Lightning's girlfriend accepts the proposal and then Captain miller from the camp with junior arrives with Junior's dog tags.

Terrance Howard tells the captain to stop being self pitying and then we see him drinking before they get in the planes. The Red Tails decide to stay with the bombers to the whole mission and go against orders. The Nazi's and Liam Neeson looking guy turn up in Jets and start attacking the Red Tails maybe they have decided to wait till the last 20 minutes to kill some of them. I hate to say it but I hope some of them do die, just so we get some real tension and drama.

One of the bombers turn back as they get attacked and loss an engine and a squad member, Lighting takes a jet head on with Liam Neeson looking guy, but he gets badly shot up and looks like he will die, yep he died but I actually wanted him to survive as he was a great character with a full story and not just cliches.

Junior arrives at the service/funeral for Lightning and announces he will know as the Fabulous Ray Gun. The Red Tails get awarded for their skill and bravery and ends with a brief message about the number of awards they got.

I can see that the makers of this film put a lot of effort in the to flying sequences and wanted to tell this story though battles. But the battles when they had supposed dangerous ones had no suspense or tension as you knew no one would die. It was obvious that they would have to kill one of the main guys. It felt manipulative to have Lighting die as he kept risking his life though out the movie and was about to settle down, but that’s why you could see it coming in the final battle, but I had hoped that Captain would of died cause he was just annoying and there was nothing likeable in my opinion about him. As I stated earlier this movie is Glory and any other movie about the struggle of a minority to be accepted and retreated with respect. I would rather watch Cool Runnings then this film again and I suspect that is why Netflix kept crashing when I tried to watch this film.

When this was advertised it was shown as a fun family film, which it isn't it is long and not really for kids it definitely is no Star Wars and I suspect George Lucas wanted this made as a personal project, it is well know he has stock footage from the war of dog fights which he used to choreograph the space battles in Star Wars.

The next set of Blogs will be about a genre close to my heart Fairy Tale Movies and interpretations of those stories.

Posted by SciFiGeekSarah at Wednesday, October 09, 2013