Movie and TV Mistress here with the third instalment of my HOUSE reviews. 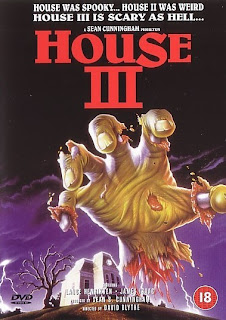 I should start by talking about the title of this film, in the UK and as you can see from the cover it is called HOUSE 3 but in the US it is called THE HORROR SHOW and when the credits start the film is just called THE HORROR SHOW even on the British DVD. This has lead to debate online as to whether it is a true third instalment of the HOUSE series.


This is what I believe, it is part of the series, partly because it is called HOUSE 3 and comes in the box-set, but mostly because if you look at the plot it is similar to the first HOUSE film without comedy. It is a haunting brought on by revenge. However I am also aware that according to producers, the fourth film is actually the third movie in the "House" series. Because the unrelated “THE HORROR SHOW" adopted the title "HOUSE 3" in both the UK and Australia.
Sean S Cunningham mentions on the HOUSE 2 commentary that he saw these movies as an anthology of haunted house tales not a series of movies about one house, which explains the differences in styles between each one.
So on with the review, the movie's credits start with a silly home video of the family in the house having a BBQ and playing in the yard, this may be the lightest this movie gets, as this is the darkest movie of the series and stars Lance Henriksen as the cop/father, Brion James as Meat Cleaver Max (in case you can't tell, he's the villain) Dedee Pfieffer as the cop's daughter and Aron Eisenberg as her brother (he used to be in DS9 as Nog the Ferengi kid)
The house in the movie is just a typical big American house, nothing like what’s shown on the cover art. It's the middle of the night and Lance is checking the house and family, I guess there may be our first scare coming already, as he gets his gun. Oh no the front door is open and it's all foggy, I suspect this opening sequence is a dream. All of a sudden a cat jumps out of no where giving us our first Jump scare, I'm always reminded of Ripley's cat in Alien when this type of scare happens. Lance stares at the furnace in the basement smiles and then we are at a location where he and his partner are hunting down the serial killer, I bet his partner is one day from retirement. Anyone for some fried hand or heads for dinner, looks like quite the delicacy.


I may be making all the jokes as this movie is to serious. Oh and I was right his partner didn't make it. Max has hold of a little girl, he cuts her head off but she still screams, Lance wakes up hurting his wife but it's Max in drag who sticks a meat cleaver in his chest and then he wakes up again but has blood on his chest. This seems like Nightmare on Elm Street, which may explain the tag line “You'd rather be on Elm St.” You may be thinking this movie also sounds like another Wes Craven movie called SHOCKER which it really does, even the electrocution scene seems like it belongs in a Craven movie. I thought the horrible electrocution in THE GREEN MILE was bad this is worse.
So Max didn't die straight away he got loads of volts broke his restraints and while on fire told Lance “I'm coming back to tear your world apart” he then promptly dies. A weird professor asks the doctor if there has been any electric impulses or weird activity, but the Doctor says he had 50000 volts put though him and leaves the professor to do his checks, the professor witnesses an Electric spirit leave the body and then we see it in Lance's House fuse box, time for cat jump scare number 2, oh dear no cat, will it return or has Max already killed it?
Lance sees his Psychiatrist who thinks the cut could be a form of stigmata, lance laughs it off and leaves, the Professor warns Lance in the car park but of course he is ignored. We get set ups for later scares including seeing a Halloween mask and instead of finding Max behind the cloths in the basement it's Vinny, Dedee's boyfriend. It's suddenly night and Lance is driving and picturing everything that happened he nearly has a car crash and then talks to Max in the car.
Lots of stuff happening in the rooms in front of mirrors, mirrors in horror movies always make me nervous. Vinny is still in the basement and is going to leave when he hears Dedee's voice telling him what to do, but he can't see her. It's Max he's back and kills Vinny.


Dedee goes to the basement but can't find Vinny, Lance nearly gets some action with the wife but Max calls, killing the mood. Dedee gets her brother to help her look for Vinny. Oh Yay, more creepy music while people sneak around the house, Lance goes to the Basement and shouts at the Furness as it sounds like Max, well I think it sounds like Beetlejuice, I expect him to say “I've come for your daughter” while he talks about her. Dedee comes clean and is grounded next day the family is having a turkey lunch. Now this is the 80's horror movie with twisted images, so I suspect something is inside or is going to come out of the Turkey, because they keep giving us close up's. I was kind of right the turkey changed and had Max's face on it telling Lance that his family was dead.


Next the family are watching some comedy on TV, but Lance see Max doing stand up and can't take it so shoots the TV. He goes to his therapist and says he thinks he's going crazy, he decides to visit the home of Max but the Professor shows up explaining everything including Max being electromagnetic evil and how to kill him.


Dedee gets a phone call from a dead Vinny asking her to go to the basement and surprise, surprise Vinny falls on her. Because Lance was shouting in the Basement when Vinny was last seen he is arrested. Meanwhile the professor still at Max's place records his plans to kill Max but Max kills him. Lance is questioned by Internal Affairs and then Max disguised as an attorney threatens him, Max calls and threatens Dedee and then we have the classic shower scene required in all horror movies, but no scare yet. Ah he's a gentleman he waited till she was dressed and in her room before he attacked her.
Lance escapes the Police station, but meanwhile it's the mothers turn to be scared by following a girl to the basement and the reveal of the dead cat and the girl with a cut throat, Max kisses the mother while making cat noises. Lance arrives to find his son's ears cut off then Dedee can't get out of bed because she is pregnant to Max, while Lance's chest cut is getting worse and opening. It's starting to remind me of Videodrome or any David Cronenberg film with weird images and make up.
Lance falls down the stairs and then wakes up finding his son and daughter are tide up at the dinner table, Dedee has a baby, which Lance takes and goes to smash it but everyone disappears. Lance goes after Max and ends up in the place from the start, the professor's head reminds him what he needs to do and then blows up. Lance catches up with Max and his wife, there is a fight and Lance and his wife get away and electrocute him which makes him real and then Lance shoots up his body in the real world.
The family sell the house and everybody including the cat is back to normal, but what about the Professor?
So that was HOUSE 3 it's definitely a lot creepier and darker then the other two. As I said it owes a lot to Cronenberg and Craven in it's style and format, there really isn't anything you haven't seen in the more successful horror series of the 80's. This movie felt like a bit of a mess and seemed to be making things very complicated with how Max's character worked, there were definitely elements of Freddy Kruger, but so much more in common with SHOCKER the other Craven film, which came out the same year as HOUSE 3 and was the more successful film at the box office. If you would rather see a HOUSE movie try to be scary then this one might be for you, but I still think the first one works the best in it's own way.
Next the return of Roger Cobb (William Katt) in HOUSE 4: The Repossession.
Posted by SciFiGeekSarah at Sunday, July 17, 2011